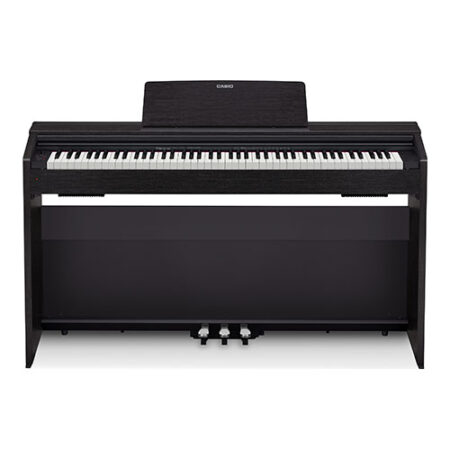 The Privia PX-870 is the flagship of the world-renowned Privia line of digital pianos, designed to give you a true grand piano experience. With authentic piano sound and feel, a stylish modern design, and the powerful new Sound Projection speaker system, the PX-870 is a brilliant instrument for inspiring brilliant performances.

The PX-870’s award-winning AiR Sound Source includes a new four-layer stereo grand piano which comes alive with realistic damper resonance, simulating the entire body of the instrument, not just the strings. The piano also includes key action sounds, key off simulation, adjustable hammer response, and a lid simulator with four positions. The PX-870 also includes string resonance, which exposes the sympathetic harmonic relationships between vibrating strings. Along with adding to the subtle beauty of the sound, this adds authenticity when playing works by Debussy, Ravel, and other composers who wrote with string resonance in mind.

The PX-870 features a variety of 19 instrument Tones, with the ability to layer and split them as needed. With a generous 256 notes of polyphony, you can rest assured that even the most complex performances will sound perfectly natural.

The acclaimed Tri-Sensor II Scaled Hammer Action piano keys give you the expression your performance deserves. The simulated ebony and ivory textures give you an authentic and comfortable touch, combined with an innovative hammer action that is accurately scaled across the entire key range. Adjustable touch sensitivity and hammer response allow customization to suit any playing style.

The PX-870’s innovative new Sound Projection system fills the room with rich, detailed sound. This powerful 40-watt, 4-speaker system is designed to envelop the listener and audience with sound emanating from various places on the instrument, just as it would on a traditional grand piano. The Volume Sync EQ ensures that you hear a balanced, clear sound across the entire frequency range, at any listening volume.

The PX-870’s convenient features are useful at home, in a lesson studio, or anywhere else. You can connect two sets of headphones using the ¼” jacks on the front panel, making the PX-870 ideal for quiet practice. A unique Headphone Mode optimizes the PX-870’s sound for headphone use. Duet Mode splits the piano into two equal pitch ranges, allowing a student and teacher to sit at the same instrument.

60 songs are included in the built-in Music Library, with room for ten additional songs of your choice. You can also record your performances using the PX-870’s two-track MIDI recorder, or insert a USB drive into a discreet port to capture your playing as a two-channel audio recording.

Concert Play allows you to play along with ten recordings of well-known orchestral pieces, with the ability to either listen to the piano part or silence it so you can play it yourself. To facilitate practice, you can even slow down these recordings without affecting their pitch.

Designed to compliment any décor, the PX-870 is available in either a black or white finish. Its compact, elegant cabinet with sliding key cover adds to the beauty of any room. The easy controls are located to the left of the keys, allowing you to play without distraction.

The PX-870 connects via class-compliant USB to any PC, Mac, iOS, or Android device, with no drivers or installations needed. The free Chordana Play for Piano app, available for iOS and Android devices, gives you complete control over every function in your piano. It also displays PDF scores, lets you play downloadable MIDI songs using your piano’s internal sounds and speaker system, and learn to play MIDI songs with an interactive scoring system.

The free Chordana Play for Piano app, available for iOS and Android devices, gives you complete control over every function in your piano. It also displays PDF scores, lets you play downloadable MIDI songs using your piano’s internal sounds and speaker system, and learn to play MIDI songs with an interactive scoring system.